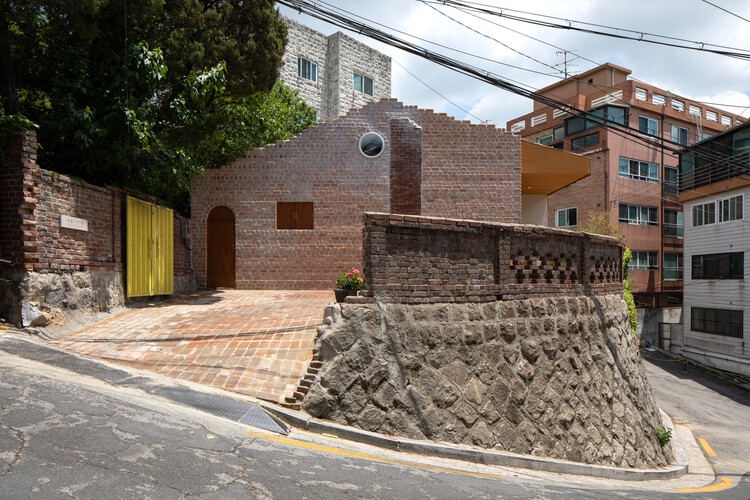 Seongbuk-dong Share Kitchen Remodeling – ‘Assisi’ is a small town in the central area of Italy, and it is famous for buildings that were built by piling up bright colored building stones. The building owner visited this area a few years back and wanted to reflect on the feelings from the trip while remodeling an old house in the village of Seongbuk-dong. The exotic impression of ‘Little Assisi,’ a shared kitchen designed by remodeling an old house, began from this mind. In the façade acquainted with the alley, a material that reminds of Assisi was selected to show a fresh design that is hard to find nearby. In addition, all the rooms were demolished to use as a shared kitchen and designed so that the cooking process and meals can be enjoyed in a wide space.

Little Assisi transformed from an old house into a shared kitchen. It is now little Italy in Seongbuk-dong and a base of the local community for the residents to interact. Under the theme of a shared kitchen, an old residential space in Seongbuk-dong was reconstructed. It was inspired by the temporality of an old building and boards and bricks were constructed to express the layers of time. The structure and atmosphere of existing houses were vitalized and also designed to harmonize with the neighborhood and alley. At the same time, the design did not miss out on implanting new images.

Layers of Time – Seongbuk-dong is a village located in the east outside the Fortress Wall of Seoul and designated as a scenic area back when the nation restored independence and many cottages were built all over the area. This remodeled house also used to be used as a cottage, so it is located on a hill and back then, there was a Hanok village under this house and the visibility is opened to the point where the east of the Fortress Wall of Seoul on the other side stands out at one view.  This house was built in 1960, and the difference in elevation of more than 4m height from the slope was supplemented with stonework to construct the stylobate, and it was a white house with brick rails and masonry.  The client had a strong affection for this house and the village in Seongbuk-dong, and was planning to tear it down to build it again. However, the client wanted to build a space to join other village people and make this house and Seongbuk-dong to the public and planned a shared kitchen.

Layers of Materials – Before setting up the plan for the construction, the client requested to reflect on the sentiments of Asssi in Italy in the front yard and façade. A few years back, the client visited Assisi, a small city in Italy, and it is a city visited by people around the world for pilgrimage and also where The Basilica of Saint Francis of Assisi is located. This city was constructed by piling up red stones to build the buildings. Remodeling the house in Seongbuk-dong that was built over 60 years ago always involved contemplation about the point where existing materials and new materials converge.

The key materials of the construction and the façade design were planned through two aspects. First, Mont Blanc bricks were used for the side façade visible from the alley to contain the physical property and mood of depth that continued over a long period. On the one hand, the client wanted to feel the atmosphere of Assisi, so the façade and yard of the house adjoined to the alley were built with layers of bricks. The other houses around the house are also finished with bricks and tiles, so it is harmonious with the atmosphere of the alley, and in a way, it creates an ancient future and shows the coexistence with a meditative attitude.

In response to the client’s response, materials and structures that resemble the atmosphere of Assisi in Italy were selected for the façade adjoined to the alley and provided newness in terms of the design. Second, a new material called cedar shake (cedar wood) was used for the façade visible from the distance of the alley. Just as fragments harmonize and naturally accumulate the time of the materials, it is applied to the new façade material. Accordingly, the front and the ceiling were all constructed with cedar shake based on the design of the previous material method. Since the house is located on a hill, the stylobate made of stonework and brick rails were used together so that the house is easily visible from the distant road facing the house.

Layers of Space – This house was a cottage in 1960 but then turned into a house and then a photo studio and flower shop. By 2020, the purpose was changed into a shared kitchen for all. Since it is used as a shared kitchen, the gate of the yard and walls were partly demolished with the plan to secure an alley that can fit two cars and a shared yard connected to the alley. All the spaces that used to be rooms in a teahouse were demolished and supplemented to secure the kitchen and the living room as much as possible, and designed a living room and also a room with a skip floor structure within a single space. To emphasize the properties of a shared kitchen, a wall type sink and island sink were designed and connected to a long table in the central living room. In Seongbuk-dong, Seoul, this house was built as an assembly of complex time and space styles with a Japanese ceiling structure, a facade that partially adopted the Italian Assisi sentiment, and a cedar shake that resembles the traditional wood shingle roof in South Korea.