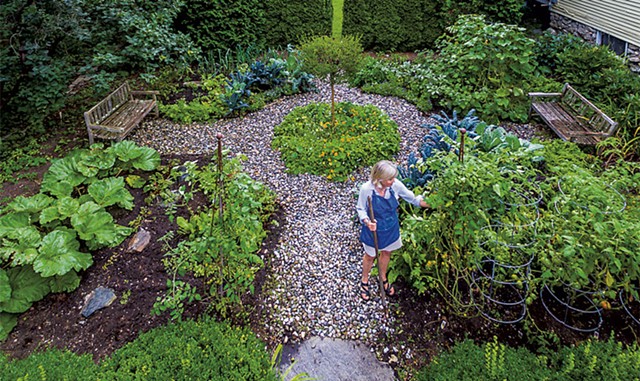 “I garden because I love to eat,” Ellen Ecker Ogden wrote in her most recent book, The New Heirloom Garden: Designs, Recipes, and Heirloom Plants for Cooks Who Love to Garden. A well-designed kitchen garden, the Manchester-based kitchen-garden designer, educator and cookbook author continued, can “turn ‘work’ into ‘play.'”

In 2003, Ogden downsized dramatically from the 10-acre farm where she’d run a seed catalog, The Cook’s Garden, with her former husband, to a quarter-acre plot in the village of Manchester. On it, the yellow house built as a boardinghouse for employees at the nearby Equinox House, now the Equinox Golf Resort and Spa, “seemed like a perfect temporary spot,” Ogden said. She planned to stay for a few years while her children finished college. “Now it’s been 18 years,” she said. “Once you start putting in gardens…”

The property had a few old crab apple trees and lilac bushes but was otherwise gardenless. For $150, she hired a landscaper to lay out a general plan. The first step was to move the driveway and plant a boxwood hedge in front of the gingerbread-style porch.

The rest of the front garden is now filled with things “meant to make people smile as they pass by,” Ogden said, including fragrant nicotiana, bright sunflowers, droopy kiss-me-over-the-garden-gate and 100 ornamental allium bulbs that lined the boxwood with their tall, purple puffs this spring. A pollinator patch of milkweed, wolfsbane, cimicifuga and an assortment of native plants tends to grow a bit wild but is constantly abuzz.

“I just want people to walk by and be excited by a garden,” Ogden said. “And there’s so much pleasure in planting not just for the beauty of it but for all kinds of visitors.”

When Ogden teaches garden design, she starts with the big picture: Students grab a pen and paper and draw the yard from above. The bird’s-eye view gets them thinking about how their design will fit into the landscape and connect with its surroundings, Ogden said. Where does the sun come from? The wind? Are your neighbors annoying enough that you need a visual block?

Often, vegetable gardens are relegated to the far reaches of the yard, while flower beds surround the house. When designing a kitchen garden, Ogden recommends getting it as close to the house as possible — close enough that you can start sautéing onions on the stove, run out to harvest a handful of herbs and be back before anything burns. 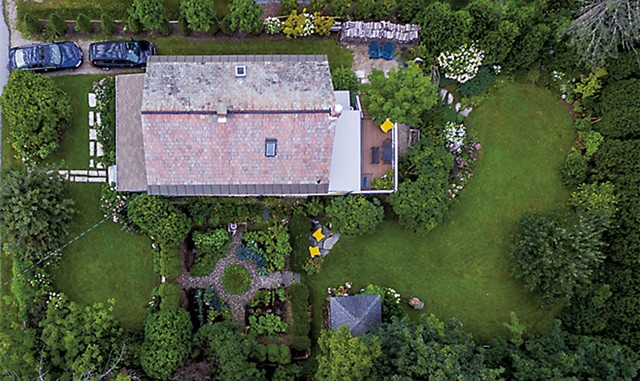 In her own small yard, the default place for a kitchen garden was on the south side of the house, hidden by a hedge from the public-facing front.

“Welcome to my Secret Garden,” Ogden said, stepping through the hedge’s gap into the enclosed space.

The classic foursquare parterre design is anchored by an ornamental lilac in the center of the river-stone path, with alpine strawberries, volunteer poppies and borage growing underneath. Three massive rhubarb plants in their full early-summer glory threaten to take over one corner, and pink and white peonies provide a perennial pop of color. 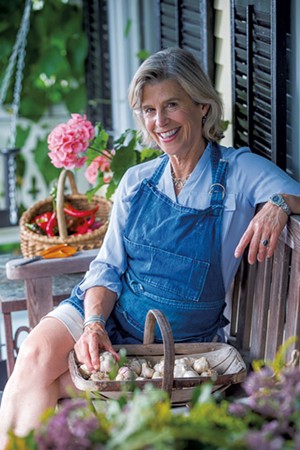 As formal as the layout seems, it’s also a practical one: The four growing areas make it easy to rotate crops to keep the soil healthy. Most of the plants in Ogden’s kitchen garden change every year — and every few weeks.

Neat rows of tiny arugula shoots were sneaking up between more established chard, cucumbers, tomatoes, edible flowers, basil and other herbs. Ogden replants a nearly constant succession of lettuce and mesclun greens, paying attention to how long it takes for the chervil, cress, cutting mix and purslane to grow and staggering them so they are ready to pick at the same time.

In mid-June, a spring planting of loose-leaf lettuces had become brilliant red and speckled green poufs. They had passed their peak flavor, but the rabbits were still interested, Ogden said.

“I’ve become less of a fussy gardener,” she said, pointing out a patch of spinach starting to go to seed. “More and more, I like the wild piece — but it took me years to really be OK with that.”

Ogden had already moved collards and kale into containers on the other side of the house, removing them from the threat of hungry rabbits in the unfenced kitchen garden. Brussels sprouts were next on the rescue list. 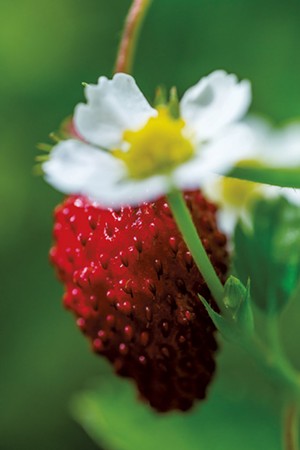 “We’re so lucky to have great farmers markets and moderately good supermarkets,” Ogden said. “So I don’t believe in trying to grow everything.”

Instead, she follows an 80/20 rule: Each year, she devotes 80 percent of the garden to favorite varieties such as Italian purple pole beans and curly, flavor-packed heirloom Anellino beans. The other 20 percent is for something new, like this year’s Cinderella pumpkins. One year, she tried artichokes; they were so successful that they’re now part of her tried-and-true roster.

Ogden is a big fan of vines and creates all sorts of bamboo trellises around the yard for them to climb on. One such trellis — soon to be embraced by the vines of chocolate runner beans, started from seeds she saved last fall — arches over the back steps down from the kitchen garden into the rest of the yard.

Straight ahead is the garden’s focal point: an old, twisted apple tree. A remnant of a former orchard, it reliably produces green apples that aren’t great for eating fresh but make for wonderful pie. Ogden considers it her garden’s “sweet spot.” 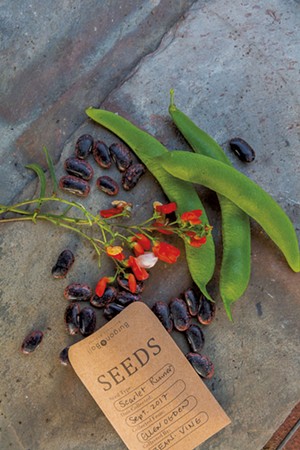 Irish author and garden designer Mary Reynolds talks about the importance of finding the place in a yard “that sends up an extra vibration,” Ogden said. “That’s where you want to put your garden bench.”

Ogden believes every garden needs a bench or chair — somewhere to sit, observe and listen. She has sprinkled benches throughout her quarter acre, providing different vantage points and reminders to relax.

Every garden also needs a shed, Ogden said, so that tools are close at hand. That was the missing piece during a recent garden consultation, so she asked the client if anything on the property could be repurposed.

“It turned out they had an outhouse way down in the lower field,” Ogden said with a laugh.

In her consultations, classes and books, Ogden balances practical suggestions for making gardening more pleasurable — a bench, a shed, proper tools — with overarching wisdom about the importance of planning. A five-year plan, in fact. But perhaps her most important lesson for new gardeners and for herself is “don’t try to be too perfect.”

“Vermonters spend so much time shivering in the cold,” Ogden said. “Creating a space that fills us up again so we can get through that long winter is so important. It’s a sanctuary, and it just has to make you smile.”